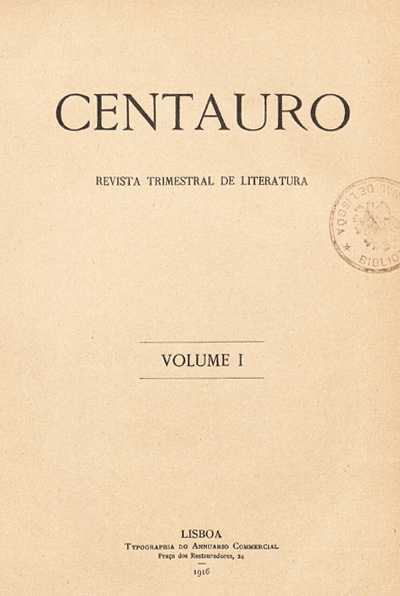 Centauro was, along with Exílio, the most significant literary magazine (from the point of view of the critical fortune that followed) of 1916.

Like this second title, Centauro was directed by one of Orpheu group, which constitutes a distinctive feature of continuity with the Pessoan magazine. If we compare the two title pages, the graphic similarities are evident. Luís de Montalvor, the first director of Orpheu, appears here with an even greater prominence. Its introductory text "Tentativa de um ensaio sobre a Decadência" ("Attempt of an essay on Decadence"), defines the magazine's aesthetic plan ("We are the descendants of the century of Decadence", he says in the incipit). In fact, it is the aesthetics of Beauty, in a symbolist way, that this publication aims for, the most repeated words of this editorial program.

Although it does not declare itself, like Orpheu, as a magazine between Portugal and Brazil, and also for that reason less cosmopolitan and less open to the outside world (the literary collaboration is exclusively national, it should be noted), it is still worth noting an approximation. On the back of the title page there is, for example, information that texts by Eduardo Guimaraens, also present in the second issue of Orpheu, and by the Spanish Valle-Inclan, would be published. The mention, also on this page, of the "late artist" Mário de Sá-Carneiro is equally curious (he had died in April of that year, in Paris) and also constitutes a bridge for the 1915 magazine.

Regarding Exílio, this magazine assumes itself even more literary, excluding any texts of any other nature. On the other hand, and graphically, they are quite similar – even the cliché of Guerra Junqueiro in the first one is equivalente here to the hors-texte of Christiano Cruz, a dismayed centaur, a clear symbol of the importance of classical mythology and a character from the Symbolist pantheon. This figure thus opens the volume as if announcing modernity as an 'exile' in the past, in the currents considered arrière-garde by the end of the century.

Although one can advance some bridges with Orpheu, one should not ignore their difference either. Centauro emphasizes, like Exílio, a decandentist propensity of its director, seeking his collaborators from the less innovative names of the 1915 publication. A long narrative text also of mythological nature "A aventura dum Sátiro ou A Morte de Adónis" ("The Adventure of a Satyr or The Death of Adonis"), confirms him as a controversial author.

On the other hand, "Passos da Cruz" also appears as a good match for "A Hora Absurda", which Fernando Pessoa had just published in the spring of that year in Exílio, especially in terms of its tone and structure. Pessoa writes them between 1914-16. The poem endeavors in the consecrated (and very decadent) idea of ​​the solitary genius, by extension of the damned artist, whose mission is to civilize the world - a dysphoric tone that must be contextualized in the year of the death of Mário de Sá-Carneiro, his ill-fated “compagnon de route”.

Alberto Osório de Castro is an author who clearly is envisioned within this Symbolist aesthetic, with a great oriental influence, a collaborator of that pamphletary organ of Symbolism that was Boémia Nova (1889). Here he appears with four sonnets where the oriental and exotic atmosphere (eg ‘íbis’, ‘petite créole’, among others) of Symbolism is evident, in rapt exclamations and reticence.

Júlio Vilhena and Silva Tavares make up the rest of Centauro's cast of decadent authors: the first with a long narrative poem evocative of the Discoveries (see how at the end of the text Montalvor is echoed: "Decadence is the mother of all things ..."), and the second with six sequences of irregular and floating verses so significantly entitled "Poems of the sick soul", where once again this grammar of the fin-de-siècle dream appears enshrined.

Perhaps Centauro's most important collaboration is the set of sixteen unpublished poems by Camilo Pessanha, a personal friend of Alberto Osório de Castro, whose poetry was clearly influenced by the former. The history of its publication is equally interesting: long before Clepsidra (1920), Ana de Castro Osório, Alberto's sister, obtained these texts from Pessanha himself during a trip to Lisbon. Like the nucleus of Pessoa's sonnets, these texts are part of a Symbolism with a vague and languid content in the treatment of the subject, being the best example of them in Portuguese letters.

Curiously enough, Centauro would want to continue to publish Pessanha, namely his translations of 'Chinese Elegies', as the back of the title page tells us, if the magazine had the opportunity to carry on. This single number was left as a witness to those intents.