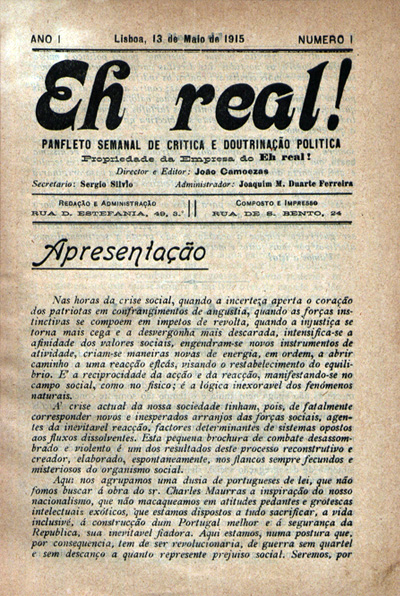 Eh Real! was a publication subtitled “Criticism and Political Indoctrination weekly pamphlet”, edited by João Camoesas. Only number 1 (May 13, 1915) was issued.

In the presentation, the prosecutors call themselves “a dozen genuine Portuguese”, defenders of a better Portugal and the security of the Republic, but who did not draw inspiration for their nationalism from the work of Mr. Charles Maurras. It is a clear allusion to the Portuguese Integralism, which aimed at reimplanting the Monarchy and followed the Maurrasian principles of the Action Française. Thus is the political orientation of the pamphlet. The director is, moreover, a man located on the left wing, who would be twice Minister of Education (1923 and 1925), with ambitious and innovative programs, and was even the author of the work O Trabalho Humano, where, for the first time, Taylorism is disseminated in Portugal as a theory of the physiology of effort. He ended up dying in exile in the United States, in 1951. Camoesas elects General Pimenta de Castro, then in charge of the dictatorship's government, and Paiva Couceiro, military chief of the monarchical hosts, as his main enemies. The latter is the subject of his article, 'Nun'Álvares', where, invoking the figure of the Constable, 'personification of honesty', the author criticizes the 'disapproval' of his name having been used one day to 'adorn' a traitor. The traitor Paiva Couceiro is also the subject of another article, ‘The Spectacular Arrogance of Paiva Couceiro defines well the miserable treachery of the government’, by Sérgio Sílvio, here named ‘criminal’ and associated with Pimenta de Castro. The General, in turn, is ridiculed in the heading 'Ironic Letters', by A. Bustorff, with a suggestive article, addressed to the 'Ignorantissimo General': 'Pimenta de Castro through Grammar' or 'The Grammar of Pimenta de Castro' . On the opposite page, as a parody, a subscription to a monument project to the hero of the ‘presidential supremacy’ is opened…

In fact, Pimenta de Castro governs (from January to May 1915), indifferent to the parties, an indifference that encourages the anti-democrats in their fight against Afonso Costa, but also leads to the union of militants from the various parties against the common enemy. On the 14th of May, exactly one day after the pamphlet came out, the revolt of the Navy, or 'coup of the swords', commanded by Leote do Rego, would put an end to the ephemeral pepperism.

The pamphlet also contains the article by Fernando Pessoa, 'The Prejudice of the Order'. But his collaboration in this anti-Pimenta periodcal is, at first glance, something unusual, since, at another time, he writes about and against the 14th of May, 'a stomach revolution', in a text in which his sympathy towards Pimenta de Castro stands out, defined as 'the purest representative of the middle classes who came to power in Portugal' and who 'perfectly reflected their desire for peace, tolerance and freedom' (in Pessoa Inédito, ed. Teresa Rita Lopes, Lisbon, Horizonte Books, 1993, p. 346). On the other hand, his attack on the ‘prejudice of order’, which at other times he strongly defends, becomes ambiguous and should guard us against a linear reading of the Pessoa political text. Thus, for example, in a text with a similar title, 'The Revolutionary Prejudice', the writer considers that a revolutionary movement 'can be a savior' when a nation reaches its maximum state of lethargy and disorganization. There, the revolutions, being destructive and producing anarchy, make the need for order more patent (Fernando Pessoa, Obra Poética e em Prosa, volume III, ed. António Quadros and Dalila Pereira da Costa, Porto, Lello & Irmão, 1986, p. 1025).

The truth is that, for Pessoa, there are several forms of order; what his article refers to is 'not a thing: it's a state. It results from the good functioning of the organism, but it is not this good functioning’. And, as he says, the order's sole concern is 'a social morphinism'. Villaverde Cabral, in his introduction to the facsimile edition of Eh Real! (Contexto, 1983), admits that the meaning of the text does not lie in its handwriting, but in its form, as it was not only with the Integralists that Pessoa 'was making fun of it, it was also with his colleagues from Eh Real!' using, for all intents and purposes, his ability to create fiction.