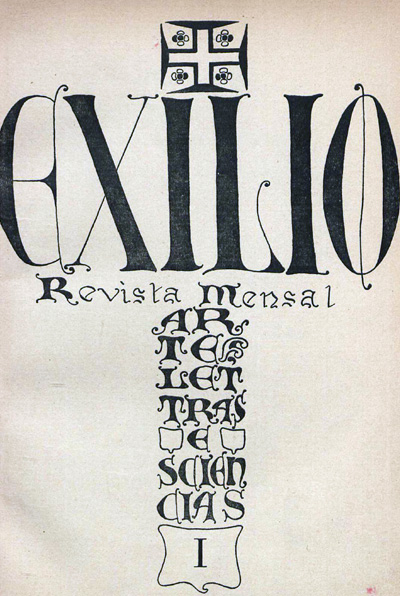 As Teresa Almeida wrote in the introductory study to the facsimile edition of this magazine, it can be said that Exílio is situated between Nationalism and Modernism.

Exílio immediately points to an ‘exile’ on letters that its editor, Augusto de Santa-Rita, the ‘saudosista’ older brother of Santa-Rita Pintor, so cultivated. The three sonnets that he decides to include in the publication (the great traditional form that abounds in Exílio) mixes this Religion-Race duo that so many past publications of that time imposed. The titles are significant: "Signal of the Race", "Your Presence" and "Heaven". The great cross of Christ that tops the graphic part of the title page is also symbolic of this. The text by Côrtes-Rodrigues, a shy modernist and a personal friend of Pessoa, entitled "Via-Sacra", also goes in this direction.

The publication's program was clear, alluded to in the first text - "Its Justification", authored by its editor. Underneath is a poem by one of Orpheu’s collaborators, perhaps the least known of the group, Alfredo Guisado, writing under the pseudonym Pedro de Menezes. These are the sonnets "The Fear of Satan at night", true hymns at night, in a symbolist way, with an allusion to the vague, and a languid and heavy description so common in the texts of the movement. The magazine also alludes to Pedro de Menezes/Alfredo Guisado, via Fernando Pessoa, precisely in the last text, as if closing the circle.

One of the most important texts in Exile is precisely this one, written by Pessoa. In it, he develops his sensationist theory and signs it as a "sensationist poet". In this final text, Pessoa contrasts two works published that year (by Pedro de Menezes and by João Cabral do Nascimento, a monarchist/integralist poet from Funchal) showing that each turns out to be, in its own way, sensationist texts.

In fact, the poet of Mensagem publishes here as a critic and as an author. Includes, on pgs. 13-16 of Exílio, one of the most important poems of its first Symbolist period, "Hora Absurda", dated July 4, 1913, and therefore written months before the appearance of heteronyms (March 1914). However, when he publishes it here, Fernando Pessoa would already be far from this text, developing his Paulism theory, the first of the three -isms (then Intersectionism and then Sensacionism). Sensacionismo, as we know, is the last -ism created by Fernando Pessoa, c. 1915, following two others – Paulismo and Interseccionismo – that emerged in the immediately previous years (c.1913-14, 1914-15, respectively), and came to function as an agglutinating -ism for all of them. In order to be able to say that, even though we are dealing with a sensational poem, its aesthetic and technical affiliation has more directly to do with Intersectionism - one of its elements.

Going back a little to the beginning, it is worth noting in this literary publication the presence of several texts that inform the nationalist idea: Leite de Vasconcelos, the eminent anthropologist of Portuguese Ethnography, writes about Portuguese Numismatics, in a detailed and thorough article in his own way. Cláudio Basto (also an ethnographer and a frequent contributor to the publication that Leite de Vasconcelos had already founded in 1889: Revista Lusitana) writes about the morphology of names, based on the parishes of Minho. Teófilo Braga completes the trinity of the illustrious and old intelligentsia, signing a historical article on the struggles of the Restoration, namely the link between the Braganças and the Jesuits. As we can see, the three articles, right in their theme, are paradigmatic of a certain past and ornate nationalism.

In this sense, the collaboration of António Ferro, another one of Orpheu's collaborators, shows the presence of a certain traditionalism in the poetry of the time: Ferro he sends, to Exílio, quatrains of popular taste, set to music by David de Souza.

António Sardinha is also, surprisingly, one of the authors of Exílio. Perhaps not as surprising as at first glance, considering the index and what we said above, Alberto de Monsaraz, another eminent integralist, is the target of the dedication of "Nero's Sunset", a long two-part poem by an unknown person (Martinho Nobre de Mello). This is a historical invective on the history of the Roman empire where you can read much of the recent history of Portugal, in a clear warning to readers.

Although a little arrière-garde, as mentioned, some texts seem to want to free themselves from the shackles of establishment. The best example in the magazine is, in addition to Pessoa's text, the fantastic fable that constitutes "Memories of a Mirror", written by an unknown person (António Rita-Martins) and dedicated to Almada Negreiros. Here, the text innovates through its somewhat cinematographic narration, fed on analeptic flashes and images of life from a mirror: an imaginative and singular text.

From a visual point of view, Exílio is almost devoid of images. The incipit letter of each article recalls the medieval illumination, and the cover itself, to which we have already alluded, shows an ancient, stylized letter surmounted by the cross of Christ. As in other literary periodicals from this period, clichés began to be considered as a form of illustration. In the middle of Exílio, an unprecedented portrait of Guerra Junqueiro appears, which also constitutes a form of legitimization of the magazine. Its author, Victoriano Braga, is also responsible for the theatrical chronicle (p.44), where an important fact is reported: the inauguration of Teatro República (now São Luiz) which will serve as a stage, the following year, for the 1st Futurist Conference of Almada and Santa-Rita...

Exile is, thus, a reasonable word when we talk about this magazine. A modernist continuity of Orpheu, with the inclusion of texts by its shyest and least innovative figures, but also a step back, a reflection of its editor's taste and values: "Exile - it will finally be the beautiful beach where, in exile, voluntarily go all those who, regardless of political color, still trust the resurgence of Portugal by the new ones."